It takes more than silver bullets to kill a werewolf

The Autobiography of a Werewolf Hunter  series is a first-person narrative of the life of Sylvester L. James and his lifelong Feud with the Beast. The first book in the series (originally titled When the Autumn Moon is Bright) contains the bulk of the story, spanning some 30+ years as it follows SLJ from adolescent orphan to seasoned killer and borderline sociopath.

Heart of Scars strikes a darker, more mystical tone as Sylvester contends for his soul after a life spent steeped in hatred and violence.

The Lineage  delves into mysteries introduced earlier in the series, explores the bloodlines of the Beast and concludes the trilogy  with the most important hunt of Sylvester's life.

The Winterfox Journals Book 1 begins a new prequel series  following the life and adventures of Michael Winterfox, Sylvester's grandfather and mentor from the original trilogy.
Autobiography of a Werewolf Hunter and Heart of Scars were originally  self-published in 2002 and 2008, respectively. Both titles were picked up by Permuted Press in 2010 and are available at their website and online everywhere books are sold. The Lineage and The Winterfox Journals Book 1 were published by Permuted Press  2015 and 2018. 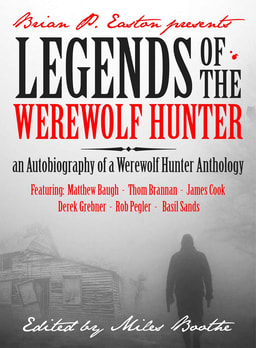 Seven  authors offer up  tales that take place within the world of Sylvester L. James, affectionately  termed the Sylvesterverse.

Hell's apex predator kills with impunity, but so does the werewolf hunter, creating a vicious cycle of blood and vengeance. Welcome to a collection imagined from the pages Brian P. Easton's Autobiography of a Werewolf Hunter series, a nightmare fueled anthology dedicated to the legends of the werewolf hunter.

Horror stalks the sideshow tents of the 40's and runs a 70's era dive bar steeped in murder... It preys from the frozen peaks of a small, 80's Alaskan town and spills across the streets of modern day New York City. From the Great Plains of Native America to war-torn North Korea and
the cradle of civilization itself in ancient Mesopotamia, the Beast is out
for blood but the werewolf hunter pursues and will not stop until the last drop of blood has fallen.

Published by Emby Press and edited by Miles Boothe