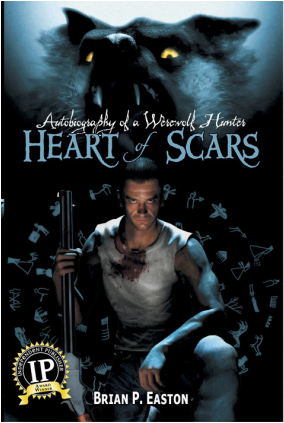 The Cheyenne spirits have named him HEART OF SCARS.

The Beast has taken just about everything it can from Sylvester Logan James, and for twenty years he has waged his war with silver bullets and a perfect willingness to die. But fighting monsters poses danger beyond death. Sylvester's feud has made him a villainous hero whose only remaining virtue is the greater evil of his adversary.

Like a wounded animal, he charges headlong toward his own destruction. He contends with not just the ancient werewolf Peter Stubbe, the cannibalistic demon Windigo, and secret cartels, but with his own newfound fear of damnation.

Haunted by cryptic nightmares and insatiable guilt, Sylvester's own resolve will not let him surrender to an easy death.

Sylvester James Logan is back and better than ever when it comes time to hunt down those pesky evil werewolves! There is plenty of action packed scenes to get the blood flowing. This time there are bigger and badder fish to fry and at times you wonder if Logan will be able to continue his mission. Brian Easton is a master storyteller who makes you feel like you are right there within the addictive storyline. The details this man puts into this story is amazing and if Hollywood needs a new inspiration I think we have found it!
-- horrorsociety.com

(Easton has) created the single most unromantic depiction of werewolves ever... and...Sylvester is the meanest monster hunter since Solomon Kane.
-- Charles Phipps (The United Federation of Charles)