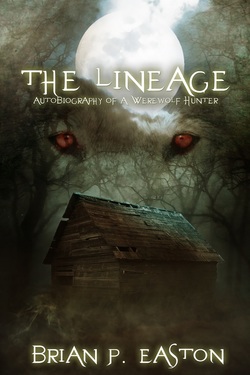 Sylvester Logan James’ Feud with the Beast has wracked his body and bedeviled his soul, but after twenty-five years it has failed to satisfy his sense of vengeance.

Having narrowly dodged a closed coffin and a one-way ticket to Hell Sylvester withdraws from his Victorian Ring handlers to recuperate, but when a werewolf delivers the severed heads of two colleagues he finds himself embroiled in an ancient grudge between the first Beast Prince Alaric and the seven Wolves who tried to overthrow him.

What comes next will be the most important hunt of his life, one that will lead him across continents to the very lair of the Beast … and the werewolf who was once his mother.

Here is one last, unflinching entry in the Autobiography of a Werewolf Hunter; a final measure of redemptive violence where every victory is dearly purchased and honor is poisoned by shame. Don’t look away.

"Beautifully horrific, The Lineage is the jewel in the crown of the series. Easton is a master of his craft." --Saranna DeWylde, Author of Ride of the Darkyrie

"The Lineage sizzles and sings, delivering on every promise made in the first two books. Brian Easton is the Kurosawa of the werewolf novel, painting scenes both achingly beautiful and violently terrible." --Thom Brannan, Author of Sad Wings of Destiny.

“The Lineage is a tense, violent, gory thrill ride. A great horror novel on its own, and a fitting end to the Autobiography of a Werewolf Hunter trilogy. It will keep you glued to the page from start to finish. This novel, and this trilogy, have my highest recommendation.” — James Cook, Author of the Surviving the Dead series.

“This book is brilliant in every possible way. Incomparable action, harrowing scenes and the richest history of werewolves to date make The Lineage and the Autobiography of a Werewolf Hunter trilogy the most important werewolf fiction of the last several decades.” -- Miles Boothe, Publisher Emby Press

"If Cormac McArthy and Robert E. Howard wrote a werewolf novel together it would about sum up how awesome Brian Easton's series is."  – Chris Kuchta, Horror Artist and Illustrator

Go to the Omnibus
Return Home